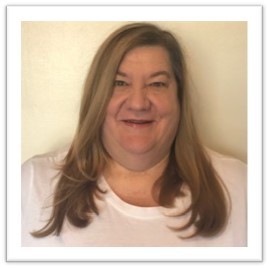 Olga has the distinction of being Accent’s first employee.  She met Accent’s President, David Ceausu, when she worked for one of his prospects.  He was so impressed with her that he asked her to join his company.  Olga has been with Accent for 27 years and serves as Director of Major Accounts.  She has a wealth of industry experience and is known for her professionalism and work ethic.  This was evidenced recently when a former client reached out to tell her how she viewed her as a role model.  Olga says this was unexpected but made her incredibly proud.

Without hesitation Olga says the best part of her job is the people.  She’s built strong relationships with her co-workers but also with many of her clients.  “It’s great when you are able to work with a client to get them what they need.  It’s also rewarding when a contact moves to another company, but they bring you with them because of the relationship” she says.   Olga is proud of the level of quality that Accent offers and talks about how rewarding it was to see “her” label on the shelf for the first time.

What’s your favourite book and/or movie and why?
My favourite author is Margaret Atwood.  I’ve followed her career for years and have always enjoyed reading her books.  I find it particularly interesting to see how certain books, like the Handmaid’s Tale, have evolved into a TV series and how the book, the original series and the new series compare.

What’s one thing most people don’t know about you?
I follow a plant-based diet.

What was the single-most influential event of your lifetime?
There were two: meeting and marrying my husband and becoming a Mom.

What was the most interesting or unusual job you’ve ever had?
I worked summers at Warnaco and did everything from factory to office.  I also worked for a year at Shasper Industries where again, I had the chance to work in different divisions.  In both cases, I learned a lot.

Where would you travel to if you could go anywhere in the world?
I’ve travelled to many beautiful places already.  I thoroughly enjoyed a past trip to Istanbul.  But I think if I were to go anywhere again, it would be either London, Paris, or Greece.

What’s your go-to Karaoke song?
I really don’t sing Karaoke but if forced, I would pick an 80’s tune as that is the type of music I enjoy.

Back to Meet the Team